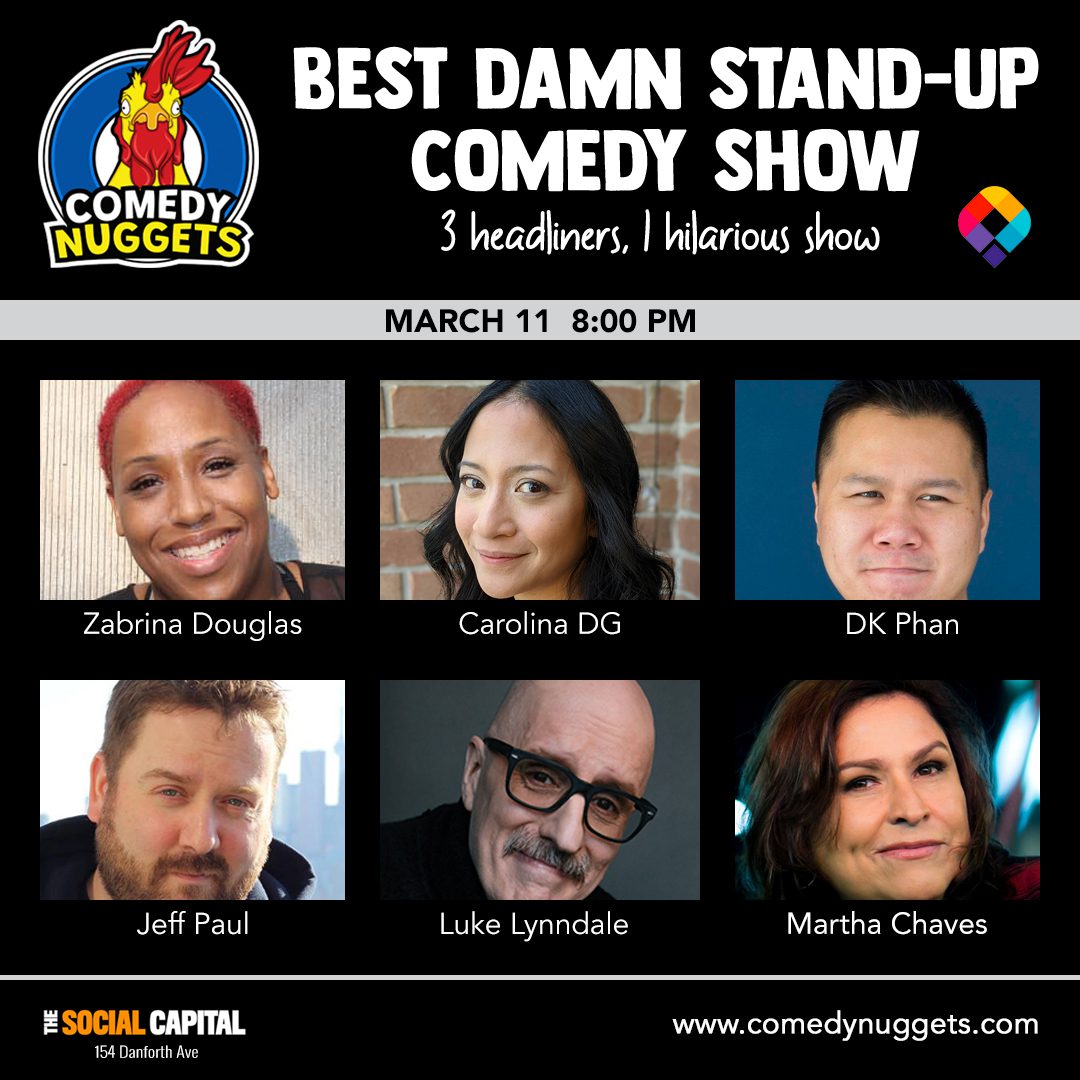 ZABRINA DOUGLAS
Born and raised in Brampton, Zabrina Douglas is a comedian that draws from her experience as a Nurse, a mother, and the daughter of 2 Jamaican parents. “She’s one of the most exuberant and cheerful stand-ups working in the city. She can turn a whole show around by kicking up the energy in the room.” – Steve Fisher of Torontoist.com. Zabrina has been a regular and headlined Kenny Robinson’s legendary “Nubian Disciples – All Black Comedy Revue”. She created and produces her critically acclaimed show “Things Black Girls Say”. She has performed in well known festivals – JFL 42, Toronto Fringe Festival, Slo Comedy Festival in California and Women in Comedy Festival in Boston. Her work can be seen on Teletoons, The Comedy Network and CBC. She has shared the stage with well known comedians Gilbert Godfrey, Cocoa Brown and Luenell.

CAROLINA DG
Carolina DG Gonzaga is a Toronto based stand-up comedian and senior living professional. She produces and hosts Comedy for Dummies at The Piston Bar and an open mic by the same name. She produced and hosted virtual comedy shows for hospitals across the GTA for social worker week and nurses week to honour our Frontline heroes. She recently appeared in The Toronto Star; and was features on The Filipino Channel for her work in comedy and her 20 years working working with seniors.

DK PHAN
Voice actor and martial arts teacher, DK brings a brand of intelligently Observational and relatable material with the hopes of having the audience feel like they’ve learned something amidst their laughter. Touching on topics such as parenting, culture, and dating, DK is able to please audiences from all walks of life. Having gotten his start at the Second City Training centre in 2010, DK has been performing stand-up comedy since 2010 across Canada and in New York. He can be seen regularly at fundraisers and festivals throughout Ontario and has made several appearances on Rogers TV.

LUKE LYNNDALE
Luke is a Toronto-based comedian. When Luke is performing, hang on for the ride – it’s fast and hilarious. In 2020, he was a finalist in the Comedian of The North comedy competition in Thunder Bay, ON and also performed in the U.S. Comedy Contest (Las Vegas, NV), Vintage Improv Festival (Boston, PA), and the New York Underground Comedy Competition (New York, NY). In 2021, Luke has performed in the Salem Comedy Festival (Salem, PA).

JEFF PAUL
With his unmistakable charm, Jeff Paul pushes the boundaries of comedy leaving no topics off limit. Jeff’s quick wit and unrestrained attitude often result in raw, embarrassing stories at his own expense.​ Jeff has opened for Louis CK, Gilbert Gottfried, and K.Trevor Wilson, is a Yuk Yuk’s regular, can be seen on Roast Battle Canada on CTV Comedy, and was selected for New Faces at JFL42 in Toronto. For 5 years he ran one of Toronto’s best weekly shows, Dope N’ Mic Comedy, at the famed Underground Comedy Club. It was also the first 420-friendly show in Just For Laughs history. In 2014 he founded the Icebreakers Comedy Festival in his hometown of Niagara-on-the-Lake. His debut album “Delightfully Dark” is available through Comedy Records and on all streaming sites.

MARTHA CHAVES
Martha is a Latin-Canadian-LGBTQ award-winning comedian, actor, activist, and budding playwright. With her unique sense of humour, friendly-in-your-face style, and devilish charm, Martha paints hilarious stories drawn heavily from personal experience, like her upbringing in Latin-America. She came to Canada as a refugee, but Martha has established herself as one of the country’s most sought-after comedians. She’s known throughout Canada for her coast-to-coast stand-up tours and for her tailor-made corporate shows, her many appearances on the Just for Laughs Festival, the Winnipeg Comedy Festival, The Debaters, and as a regular cast member of the hit CBC show Because News.